MF11RCE® belongs to a class of botanical preparations that have a structure similar to endogenous estrogen. Its effect can be described as

Traditionally, they are often still called phytoestrogens, although they are in fact phyto-SERMs, that is, selective estrogen receptor modulators.

Estrogen takes effect via the activation of 2 receptors – ERα and ERβ. Both receptors are found in various tissues such as the uterus, ovaries, CNS, cardiovascular system, immune system, skin, gastrointestinal tract, bones, etc.

Whereas the endogenous estrogens are steroids, the MF11RCE® isoflavones are non-steroidal. This is an important difference, which also accounts for the advantages and safety of MF11RCE®.

MF11RCE® can bind to both receptors, but it primarily binds to the β receptors. It has both an estrogen-like effect and an antiestrogen-like effect depending on the concentration and the target tissue. Due to this dual mechanism, it is termed a phyto-SERM (selective estrogen receptor modulator) isoflavone. 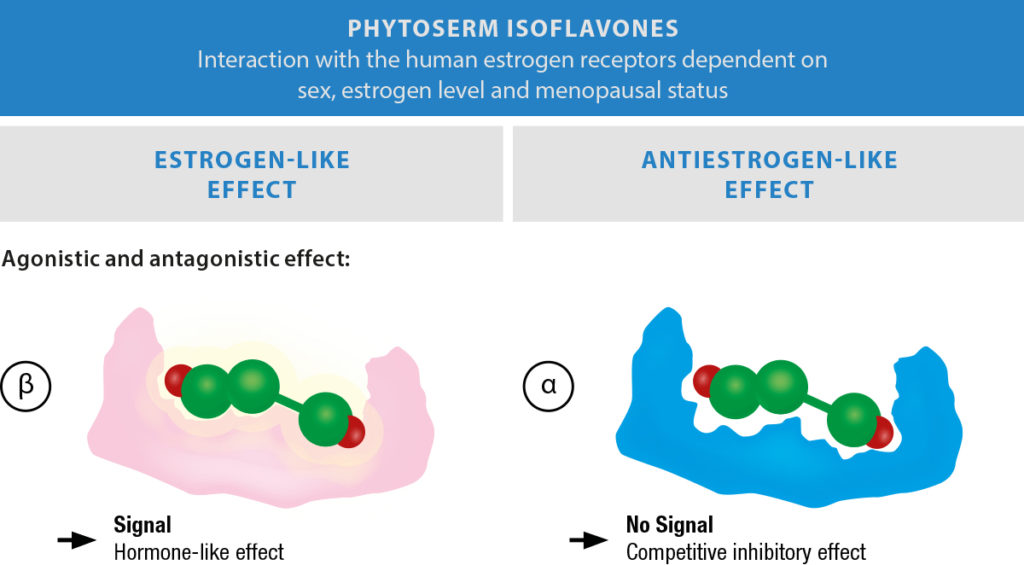 The occupation and blocking of α receptors (which have proliferative effects on the hormone-dependent breast tissue and during the climacteric, particularly when the beta receptor density is decreasing and its inhibitory and thereby protective effect is constantly diminishing) substantiates the protective effect of MF11RCE® and its safety of use in relation to the risk of cancer.