Red clover is an important source of isoflavones, which has been made commercially available as dietary supplements for the treatment of menopausal symptoms. Bioavailability and metabolism of these red clover isoflavones (RCI) have not been studied in detail. Fructooligosaccharides (FOS) stimulate the growth of intestinal bacteria and play an important role in the formation of certain isoflavone metabolites, such as equol and O-desmethylangolensin.

Aim of the Study

Seventeen healthy women and men (20 to 30 years) were enrolled in the study. Subjects were asked to abstain from eating isoflavone rich foods for at least 2 weeks before the initiation of the study and throughout its duration. Exclusion criteria included: history of gastrointestinal disorders, hormone-dependent cancers, diabetes mellitus, isoflavone supplement intake within the past 3 months, hormonal contraceptive use within the past 12 months, current pregnancy or lactation, hormone replacement therapy (HRT) use, vegetarian dietary pattern, or pre-existing chronic renal, thromboembolic, thyroid, liver, pulmonary, or cardiovascular disease. Body weight, dietary habits, and physical activity remained constant throughout the study.

All data was registered in a Microsoft Excel sheet and then analysed with SPSS (version 14.0 Chicago, IL, USA). Metabolite biokinetic parameters were calculated for all study participants and presented as mean±standard deviations (SD). Comparison of the biokinetic parameters between the first and second study periods was carried out with Student‘s t test (dependent t-tests for paired samples) or Wilcoxon rank according to the normality of data distribution as determined with the Kolmogorov Smirnov test. A p value of <0.05 was considered as statistically significant.

Biochanin A and formononetin were rapidly absorbed and both reached maximum concentrations at an average of 5–7 h. Demethylation was a major reaction in the metabolic pathway. Daidzein serum level peaked after about 12.6 h. Supplementation with FOS led to a significant decrease in the bioavailability of daidzein, dihydroformononetin, dihydrogenistein and dihydrodaidzein. An increase in equol production was also observed which did not reach statistical significance (p < 0.05). 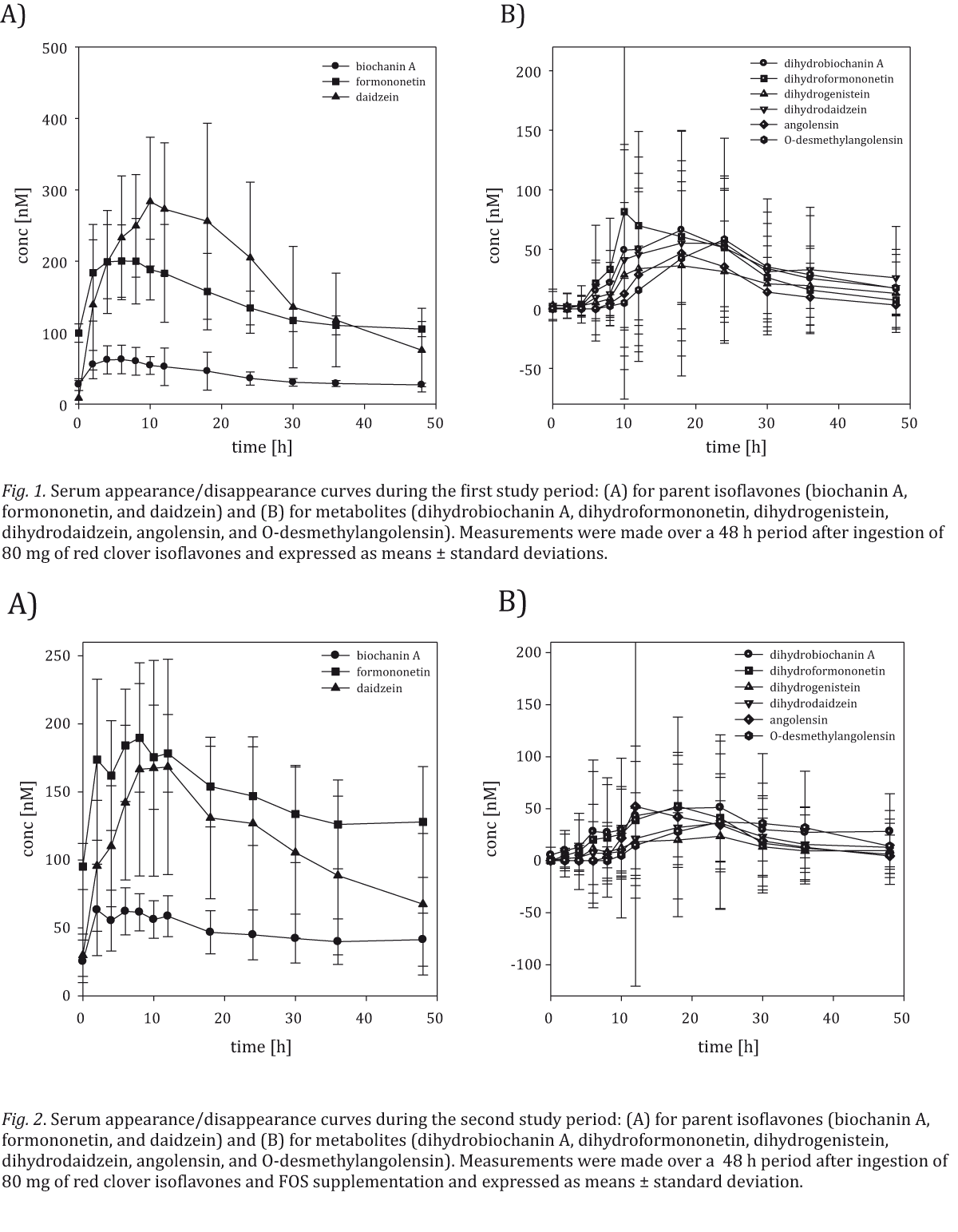 Our results showed that daidzein concentrations peaked about 6 h later than the reported for daidzein administered as a pure compound (Setchell K. et all 2001) and remained elevated beyond the study period. In addition, we found that red clover daidzein appeared to have a higher tmax than that of its glycoside from soy, as reported by Setchell et al. (Setchell K. et all 2001). Due to these findings, it seems that a single daily dose administration of 80 mg red-clover extract would be sufficient to maintain a constant isoflavone therapeutical blood level (i.e. relief of menopausal symptoms). To date only soy isoflavone data have been used to determine daily dosages. Our data seems to confirm that the assumptions made for a daily dose of RCI are valid and justified by experimental data.

Despite the limitations of the present study (i.e. sample size) it is the first to provide detailed data on RCI bioavailability. Dietary supplements containing RCI, predominantly aglycones, are an interesting alternative to soy isoflavones for the management of menopausal disorders. Interestingly, isoflavones show quite different bioavailability profiles from other flavonoids, though they belong to the large group of polyphenols and have similar chemical structures. Therefore, factors other than chemical structure must play an important role in bioavailability behaviour; hence, more research is required. The present study found a significant decrease in daidzein bioavailability after FOS supplementation, suggesting that this may be related to the observed positive trend on equol formation. Thus, although FOS did not appear to improve RCI bioavailability, it did enhance equol production, but not in non-equol producing individuals. Therefore, a standardized FOS supplementation accompanying RCI therapy seems to provide no clinical impact at the actual state of knowledge; unless there is a prior identification of equol producing individuals.

This study is the first to provide detailed data on RCI bioavailability in humans and determine no influence of FOS yet a trend towards increased equol production.

I. In healthy probands, a short-time prebiotic fructooligosaccharides (FOS) supplementation seems to

II. The study results allow to conclude that

a single daily dose administration of 80 mg  MF11RCE® may be sufficient to maintain a constant isoflavone therapeutical blood level and, thus, induce a relief of menopausal symptoms.